10 of our favourite Road Trips from Cambridge

A gorgeous genteel city with a world-famous university which has moulded some of history’s greatest minds, a picturesque river that’s intimately intertwined with its fascinating history and a contemporary arts scene which is fiercely independent and creative, Cambridge is a captivating place to visit. However, it also works as an excellent launchpad to explore East Anglia but is also well connected to go to London and many other destinations. Being located just over 30 mins from Stansted airport, it is also easily accessible from abroad.

From medieval cities to stunning beaches and other spectacular wildlife, the region really does have so much to offer. Here are our top 10 roadtrips from Cambridge: 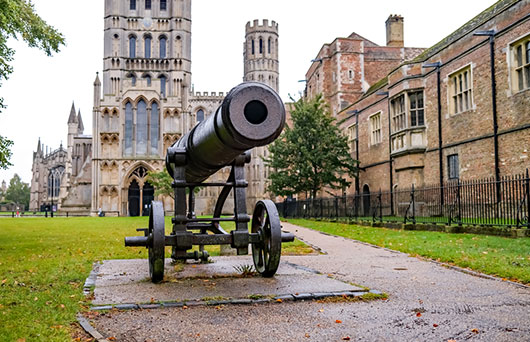 But first, here’s a few savvy driving tips to help you on your way.

Transport in Cambridge is dominated by cars: Leeds is the origin of the A62, A63, A64, A65 and A660 roads, and is also on the A58 and A61. The M1 and M62 intersect to its south and the A1(M) passes to the east. There’s also an urban motorway network – the radial M621 brings traffic into central Leeds from the M62 and M1. There is an Inner Ring Road which is partly motorway, and an Outer Ring Road. Part of the city centre is pedestrianized and is surrounded by the clockwise-only Loop Road.

Although it’s very much a drivers’ city, in 2020 there are plans to introduce a Clean Air Zone in a bid to reduce city centre pollution which is the 2nd-worst in the UK. Therefore, charges to enter the city with a vehicle (similar to schemes in London and other cities) will probably be introduced in 2020.

Central Cambridge is pedestrianized and the city centre is dominated by bikes. Driving in the city centre is tricky, due to poor signposting, one-way systems, pedestrianized areas and few parking spaces. However, there is a good network of park & rides, which allow you to park on the outskirts for free in exchange for the fee of your bus into the city centre. However cars are particularly useful for exploring the region. The M11 will take you to London and other southerly destinations, the A14 will join you to the A1 to head up north or to the A11 if you want to head east to Norfolk.

Start your engines for our 10 epic road trips from Cambridge – let’s roll!

A great city to wander around and the spires are an impressive sight , known as city of dreaming spires. The university is the biggest attraction, many tourists like to tour the colleges. Harry Potter fans will want to visit Christ Church College where some of the scenes of the film were shot. For the art fanatics amongst you, the Ashmolean Art & Archeology Museum is a must see: as Britain’s oldest public museum it holds a varied collection from Michelangelo’s studies of the Sistine Chapel to the modern art works of Sir Henry Moore. There is also the Modern Art Oxford, as well as Oxford Castle and Prison, for those who enjoy a cultural visit.

Getting there: Just under 2 hours drive away, 85 miles to the southwest.

Now the capital of Norfolk county, in medieval times, it was the second most powerful city in England. Some of the original city walls are still intact. Norwich is one of the few cities to have two cathedrals but the Protestant one is more worthy of a visit as it one of the finest complete Romanesque buildings in Europe. Norwich Castle is also the Norman Royal Palace that was once a prison but is now an art museum with a wide variety of exhibitions ranging from modern art to Egyptian artifacts. Elm Hill is the tudor style part of the city, used as the location for many films, it is beautiful to stroll around.

Getting there: The drive is incredibly simple: take the A14 east until it joins the A11 all the way through Thetford and should take about an hour and a half.

Ely is incredibly small but still a well-deserved city due to its magnificent cathedral which is most certainly the star attraction. The tower of the cathedral can be seen for miles across the Fens which surround Ely, which you can climb the 180 steps as part of the Tower Tour. There are also plenty of museums to visit such as the Ely Museum which encapsulates the history of the city or Cronwell’s House. The city also has a beautiful riverside walk, which is lined with idyllic cafes and restaurants where you can sit back and watch the boats pass by.

Getting there: Ely is located just 14 miles from Cambridge and the drive should take about 32 minutes via the A10.

At 47,000 acres, Thetford forest is the largest pine forest in the country and was built during the first world war to create a new timer supply. Now it offers miles and miles of walks, mountain bike trails, and more adventurous activities such as Go ape treetop adventure or segways.

Getting there: The drive from Cambridge to High Lodge, Thetford forest, where the car parking and Go Ape are is under an hour and down the A11 and then follow signs to GO APE.

As one of the largest conservation parks in Europe, Woburn Safari Park is the closest thing to a real safari that you will experience. It allows you to drive around the park and see a spectacular range of over 1000 wild animals roaming free, such as lions, bears, bison, zebras, tigers, rhinos, monkeys and many more.

Getting there: The park lies about an jour to the south east of Cambridge.

It is the closest beach from the inland fine city of Cambridge yet is a typical english seaside town, which retains its Victorian charm. The large stretch of beach is a mixture of sand and pebbles, with plenty of rockpools to play in. However, Hunstanton has plenty of other activities to offer, including Crazy Golf, Clifftop walks or boat trips in order to see the seals in the Wash. Clifftop walk.

Getting there: The drive from Cambridge to Hunstanton is about an hour and 20 minutes drive via the A10.

The ancient market town of Framlingham alone is worth a visit alone, not to mention the spectacular 12th- century castle which was the inspiration of Ed Sheeran’s Castle on the Hill. It was behind these walls that Mary Tudor was proclaimed Queen of England. Thecastle and the town are nestled in the Suffolk countryside and surrounded by The Mere, which is home to a whole array of North Seawildlife.

Getting there:An hour and a half drive from Cambridge via the A14.

This picture perfect seaside town is nestled between the sea and the river Alde and is renowned for its connection to Benjamin Britten, who founded the Aldeburgh Festival. You can visit the Red House, where the famous composer once lived and worked, it is now home to the Britten-Pears Foundation. Spend the day wondering the village and browsing its stylish boutiques and antique and art shops or strolling along the stretch of beach from Martello tower, which overlooks the town yacht’s harbour all the way to the shout where the Scallop sculpture lies. It is also worth popping into the Aldeburgh Museum, which sits in the iconic 16th Century Moot Hall and shares the town’s rich history.

Getting there: Adleburgh is about an hour and 40 minutes from Cambridge along the A14 then A12.

You can’t leave Norfolk without venturing forth into King’s Lynn and West Norfolk for a taste of marvellous maritime history, fenland coastal plains and rural retreats like Sandringham, owned by a certain Queen Elizabeth II. King’s Lynn proper is a medieval port with many museums and beautiful heritage buildings like the Custom House on Purfleet Quay, which was finished in 1683 and now houses the tourist office. You’ll also find the best-preserved medieval merchant’s house in Britain here, the largest chapel in all of England and the biggest medieval guildhall in England, which has been a theatre since 1442. Venture outside the city limits and you’ll reach Castle Rising, which has a large and mainly intact keep set on gargantuan earthworks.

Getting there: The journey is just over an hour by car and is an easy drive due north along the A10.

One of the perks of Cambridge is how closely located it is to the capital and therefore a road trip to London is inevitable at some point. There is far too much there to see to summarize and it is naturally a matter of personal preference but here are a few of the top attractions: the Tower of London, the British Museum, the Natural History Museum or Buckingham Palace.

Getting there: The journey time will depend entirely on where in London you are going but just head south down the M11.