Hire a car and explore Aberdeen

Known in Scotland as the Granite City because of the preponderance of that sparkling grey stone in its architecture, Aberdeen is a noble city perched on Scotland’s windswept northeast coast, which has unique traditions and a distinctive Doric language.

The city’s fortunes have been closely tied with those of the oil industry over the past few decades and it boasts attractions like Aberdeen Art Gallery, the Maritime Museum, Beach Ballroom and the famous Aberdeen FC football team, which won both the European Cup Winner’s Cup and European Super Cup in 1983.

There are also countless natural and historical attractions along the northeast coast and a little further inland, from the beautiful Moray Coast to Royal Deeside, making Aberdeen a brilliant base for four-wheeled explorers.

Before you set off, take a look at a few useful driving tips for this area: 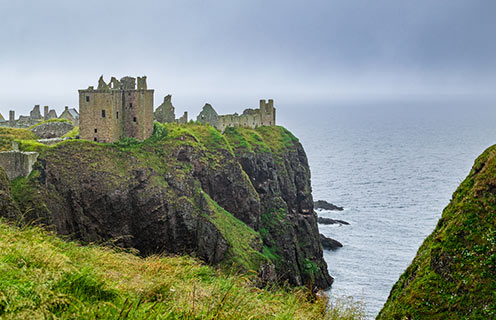 You drive on the left in Aberdeen, as is the case everywhere in Scotland and elsewhere in the UK.

If you’re driving from Edinburgh north to Aberdeen, take the M90 and A90 and you’ll be there in two and a half to three hours, depending on traffic. Some routes in the northeast require driving on B roads and smaller thoroughfares through rugged, rural areas ̶ watch your speed, beware of rockfalls and animals like sheep and deer on the road, and be patient if you encounter large farm vehicles like tractors.

Ready to hit the road for your Aberdeen road trips? Let’s go!

Drive an hour and a half west of Aberdeen alongside the River Dee and you’re in stunning Royal Deeside, so called as it has been a favourite haunt of the British Royal Family since the time of Queen Victoria. Balmoral Castle is the official Scottish home of the Royals and you can visit the grounds and gardens or even rent a plush holiday cottage. At Ballater, you’ll see the Old Royal Station, which was specifically built for ease of access for the Royals, and a little further along the A93 is Braemar, where you can refuel with lunch at The Fife Arms hotel.

Getting there: Balmoral Castle is around an hour and 20 minutes west of Aberdeen via the A93.

Scotland is a nation full of ancient castles, yet Dunnottar remains one of the most dramatic and atmospheric. Once home to the Earls Marischal, one of Scotland’s most powerful dynasties, this mystical castellated complex sits precariously on a spit of land close to Stonehaven. It’s officially a ruin, although significant portions of the original tower and outhouses remain ̶ the sea views are stunning and this is an electrifyingly ethereal location.

Getting there: Dunnottar Castle is under 30 minutes’ drive south of Aberdeen on the A92. There’s limited parking at the castle itself but you can also park in Stonehaven at the harbour and walk up.

The Moray Coast to the north of Aberdeen is one of Scotland’s most amazing areas to tour around ̶ it’s peppered with lovely beaches where you can spot dolphins splashing around in the sea, and picture postcard fishing towns and villages like Fraserburgh, Rosehearty and Boddam. The Museum of Scottish Lighthouses is near Fraserburgh and this is worth a visit for anyone interested in these fab feats of engineering and ingenuity, while the Macduff Marine Aquarium showcases local sea life in fine style.

Getting there: drive north out of Aberdeen onto the A92 and then to the A90 and follow the route around the northeast coast.

Scotland’s premier snowsports destination, Cairngorm Mountain is 1245m high and looms over Strathspey and Aviemore in the Scottish Highlands. Visit in the winter and you can enjoy skiing, snowboarding, tubing and more in this snow-kissed wonderland, but the views are inspirational at any time of year and in the summer you can enjoy activities like guided walks and hikes. If you want to feel on top of the world, it’s worth the drive!

Getting there: Cairngorm Mountain is around two and a half hours from Aberdeen via the A96, which loops westwards through Inverurie, Huntly and Aberlour.

Located close to the village of the same name in the county of Angus, gorgeous Glamis Castle is the domain of the Earl and Countess of Strathmore and Kinghorne and has been described as Scotland’s most beautiful. The ancestral home of the Lyon family since the 14th Century, this fairy-tale castle and its lush grounds were the childhood home of Queen Elizabeth the Queen Mother and the birthplace of the current Queen’s late sister Princess Margaret, Countess of Snowdon.

Getting there: Glamis Castle is just over one hour’s drive south of Aberdeen via the A90. 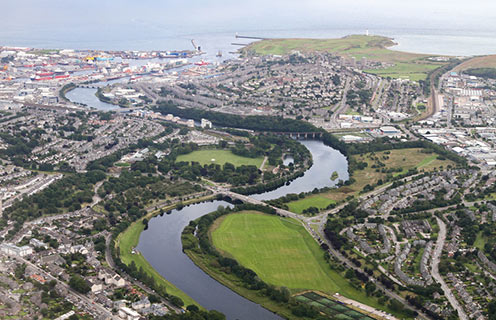 Located near to Inverness, Culloden Moor is the site of the 1746 Battle of Culloden, the last to take place in Britain and the final decisive action of the Jacobite Rebellion which started in 1745. It’s here that the Jacobite troops of Charles Edward Stuart (Bonnie Prince Charlie) were ruthlessly defeated by Hanoverian forces led by the Duke of Cumberland. The visitor centre has a fabulous battle immersion theatre, there’s a lovely restored cottage from the period and the overall ambience is highly emotive.

Getting there: you can drive to Culloden in around two and a half hours from Aberdeen, via the A96.

Located near Perth, Scone Palace is s sublime red sandstone stately home that’s an excellent example of Gothic-style architecture. Originally the location of an ancient Christian church, this was the site where Scotland’s kings and queens were crowned for over 1000 years and the home of the Stone of Destiny, which was used in the ceremony and (according to legend) is the Biblical Jacob’s Pillow Stone. The extant palace was completed in 1808 as the seat of the Murray family, another dynasty with an influential role in Scottish history.

Getting there: Scone Palace is under two hour’s drive south from Aberdeen via the A92 and A90 roads.

With a scenic location on the River Tummel in Perthshire, Pitlochry is a popular tourist town for visitors from Scotland and beyond. There’s plenty to do in and around this area, such as visiting the outstanding Queen’s View which stretches across the expanse of Loch Tummel to the distinctive peak of Schiehallion beyond, and the dense Faskally Wood which hosts the Enchanted Forest event each October. Don’t miss Killekrankie Gorge, the site of the 1689 Battle of Killiecrankie, where Jacobite forces led by John Graham, Viscount Dundee, defeated a government army with Hugh Mackay at the helm.

Getting there: drive south out of Aberdeen using the A92, join the A90 and at Forfar take the A94 westwards.

The largest town in Angus, Arbroath is a seaside town which is always worth visiting. This is the Home of the Declaration of Arbroath, a sacred document in the Scottish Wars of Independence dating from 1320, which had a seminal influence on the US Declaration of Independence. You can find out more about the declaration at Arbroath Abbey, take a calming stroll along the town’s long, sandy beaches and sample an Arbroath Smokie ̶ a tasty type of smoked haddock fish.

Getting there: head south on the A92 coastal route and you’ll be in Arbroath in just over an hour.

Speyside is nestled between Aberdeenshire to its east, the Cairngorm National Park to the north and the Highlands to the west. This is the home of the Malt Whisky Trail, a must-visit if you’re passionate about this world-famous Scottish spirit. You’ll need three days to make the most of this mini-tour (and a designated driver if you plan on wholeheartedly sampling the ‘water of life’!) and it takes in the distilleries of famous brands like Glenlivet, Cardhu, Glenfiddich and Glen Moray, passing through places like Keith, Craigellachie, and Cambus O’May forest.

Getting there: travelling anti-clockwise, the A96 takes you from Aberdeen to Keith, then it’s on to the A95 to Craigellachie and down to Cambus O’May via the B9008 and A939.

So there you have them ̶ ten travel commandments that will help you discover why Caledonia captivates visitors from all over the globe.

Hire a car in Aberdeen from Enjoy Travel and unlock the magic of this marvellous corner of Scotland!